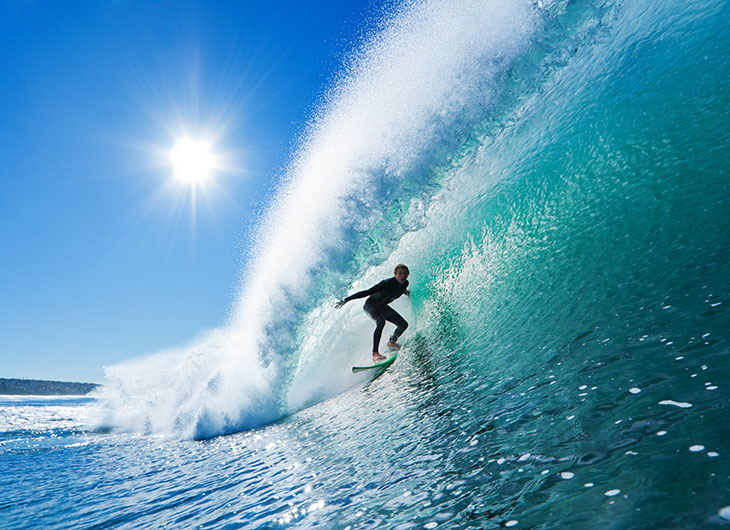 Surfer’s eye, also known as a pterygium, is a fleshy overgrowth of tissue from the membrane over the whites of the eye (the conjunctiva) to the cornea (the transparent dome at the front of the eye). Although a pterygium itself is considered benign, researchers in the Australian state of Western Australia have noted an association between the presence of pterygia and cutaneous (skin) melanoma.

It is thought that at least part of the link between pterygia and skin melanoma is due to the common contributing factor of ultraviolet radiation exposure – something that also unfortunately comes part and parcel with sun and surf. As the incidence of cutaneous melanomas have increased globally in the last few decades, researchers in Western Australia sought to establish whether the presence of a pterygia could be a useful early indicator of a patient’s risk for skin cancer where early detection is associated with better rates of survival; approximately 15% of cutaneous melanomas prove fatal.

The study found that majority of patients with pterygia were male (64%), which is already a well-established statistic. However, the analysis noted that males were also significantly more likely to be affected with a cutaneous melanoma (72% of all cutaneous melanomas were in males), and there were significantly more cases of skin cancers in patients with a pterygium compared to study participants without pterygia. Overall, in patients who attended for pterygium treatment, this worked out to be a 24% increased risk of developing skin melanoma. Plus, it was also noted that every additional year of age at the time of a pterygium requiring removal added an extra 2% to the odds of developing a cutaneous melanoma – in other words, older patients with pterygia were even more at risk of skin cancer.

Although the Australian study found a significant association between pterygia and cutaneous melanoma, researchers also acknowledged that the development of both pterygia and skin cancer were subject to other factors, such as ethnic origin and the rate of UV exposure in childhood regardless of current country of residence. It is known that Caucasians are generally at higher risk of melanoma when compared to African American (2.6% lifetime risk for Caucasians versus 0.1% for African Americans) or Hispanic (0.6% lifetime risk) groups, and Asia-born Australians have been found to have an overall lower prevalence of pterygia. An earlier study conducted among 1 million Taiwanese patients found only 0.04% of those with pterygia also presented with a malignant skin melanoma, reflecting a generally lower risk of skin melanoma in Asian populations despite Taiwan being exposed to relatively higher levels of UV radiation. A more recent study coming out of North East England last year also found that though their racial demographics were similar to those in the Western Australia study (that is, predominantly Caucasian patients of similar age and gender distribution), out of their 212 participants with pterygia, only 4 were diagnosed with a UV-related skin malignancy, which equated to a statistically insignificant 1.9%.

Although the link between pterygia and melanoma may not be unanimously observed globally, being “sun-smart” is still a wise choice, both for the health of your skin and your eyes. UV exposure has been linked to eye diseases including cataract, various eye cancers, and age-related macular degeneration. The American Cancer Society estimates over 100,000 new skin melanomas will be diagnosed this year, with almost 7,000 of these cases resulting in death.

Take it from a country that knows UV exposure – the land down under. A popular slogan from the Cancer Council of Australia encourages everyone to “slip, slop, slap, seek, slide”: slip on a shirt, slop on sunblock, slap on a hat, seek shade, and slide on sunglasses. It might just keep you sunning and surfing a little longer.