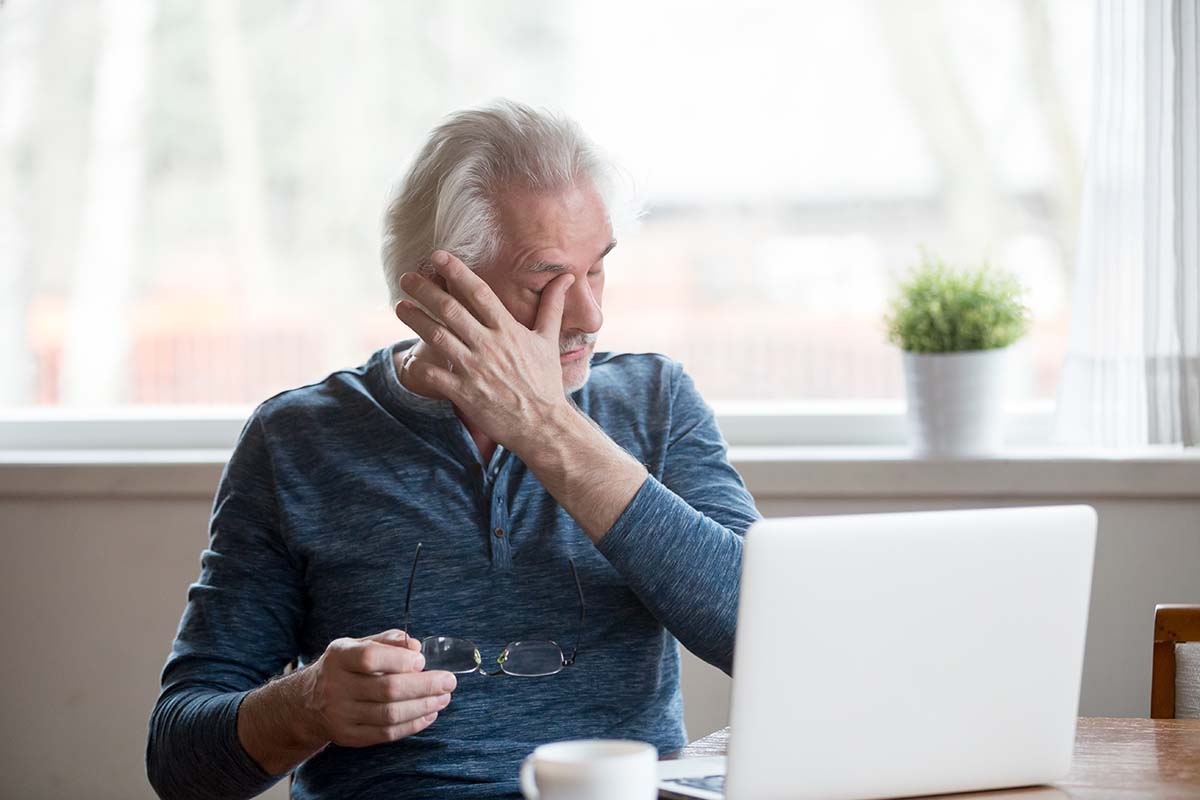 If clinical depression involves sadness, low mood, and bouts of crying, you’d think it’d be more associated with watery eyes rather than dry. However, studies have shown that depression is indeed linked with dry eye. More research is needed to fully understand exactly how these two conditions relate to each other; however, the link appears to be clear. Does dry eye cause depression or does depression cause dry eye? Or is it something else entirely?

What is Dry Eye?

In the eyecare world, dry eye is considered to be an actual disease. It may also be known as dry eye syndrome. Although most of us would have experienced a dry eye or two from time to time, for others it can be a persistent and significant problem.

Up to 50% of the world’s population is estimated to suffer from dry eye disease. However, this number is thought to be underestimated as many people don’t see an eyecare professional for an official diagnosis or management. In fact, many people themselves probably don’t even realize they have an eye condition that can be treated. The symptoms of dry eye can be pretty sneaky, and not at all what you might expect. Dry eye symptoms include:

Dry eye disease is a complex condition with a multitude of factors that underlie it. It can range in severity from a mild irritation that’s easily ignored to a severe and debilitating pain that can impact a person’s daily activities. Unfortunately, at this point, there is no cure for dry eyes, but it can be managed. Effective management is based on identifying the type of dry eye and what factors might be contributing to it, whether it be environmental (i.e., sitting near a heating vent), lifestyle (i.e., smoking), other medical conditions (i.e., Sjogren’s syndrome), medications (i.e., oral antihistamines), or other factors (i.e., contact lens wear).

Solutions for treating dry eye range from over-the-counter tear lubricants to eyedrops formulated from a patient’s own blood cells (yes, you read that right. It’s known as autologous serum). In between these two extremes are numerous other management strategies including warm eyelid compresses, manuka honey eye ointment, steam therapy for the eyelids, medicated eyedrops, and even a device claiming to stimulate tear production via the nose.
As we’re learning more and more about dry eye disease, the way it interacts with other medical conditions is beginning to emerge. For example, how it’s linked to depression.

How Does Dry Eye Relate to Depression?

The association between dry eye and depression has been explored in several studies over the last decade or so. The consensus seems to be that the two are positively associated. That is, if a person had depression, the more likely they were to exhibit more severe dry eye signs and symptoms compared to a person without depression. But why is this?

One study specified that the presence of depression could be predicted through a patient’s reported subjective dry eye symptoms but not their objective signs. In other words, patients with depression were more likely to report those dry eye symptoms like burning eyes or glare sensitivity, but on clinical examination, the researchers didn’t note any significant differences in the appearance of their dry eyes compared to those without depression. An interesting explanation for this could be that people who are depressed or anxious may just be more aware or concerned about their dry eye symptoms. This hypothesis is supported by other research that noted people who reported greater subjective happiness levels complained of fewer dry eye symptoms. Happy people were thought to be less aware of their subjective symptoms.

Other reports have found that the use of antidepressant medications could potentially underlie dry eye disease. Common medications used to treat depression, such as selective serotonin reuptake inhibitors (i.e., Prozac), can impact the function of the tear glands. In addition to this, some researchers have hypothesized that people suffering from depression may be more likely to engage in activities that are known to exacerbate dry eye, such as watching TV or staring at a computer.

Could it also be possible that having dry eye disease in the first place can make someone more prone to depression? It is plausible that the pain and discomfort from a chronic condition such as dry eye, particularly severe dry eye, could be enough to cause someone to experience depressive symptoms.