LASIK vs. LASEK – Which Laser Surgery Option Is Best for You?

Imagine this. The zombie apocalypse has finally arrived, you’re running for your life from the undead when suddenly your glasses slide off your nose – and you hear a crunch under your feet. What do you do now? Is that a hungry zombie over yonder or just a human dragging his feet?

A great way to prepare for this impending event (and to not need glasses) is to consider laser eye surgery.

In 2015, 596,000 people in the USA underwent a laser eye surgery procedure known as LASIK. This year, in 2017, an estimated 638,000 people in the USA will have LASIK performed. Also known as laser assisted in situ keratomileusis, LASIK is just one of several refractive surgery options alongside another relatively newer procedure known as LASEK (laser assisted sub-epithelial keratomileusis).  Both are surgical techniques with the aim to address what is called refractive error – basically, the need for correction with spectacles or contact lenses.

How does refractive error work?

Refractive errors occur when the focusing strength of the eye doesn’t quite match the focusing length of the eyeball. In short-sightedness, the focal point of light entering the eye falls short of the retina, which is where it needs to reach to form a clear image; in long-sightedness this focal point falls behind the retina. Astigmatism, in most cases, is when the cornea (that clear bubble over the coloured part of the eye) isn’t perfectly round like a soccer ball but is more curved along one axis, like a football, which results in light rays focusing at all different distances to the retina. Astigmatism can occur in combination with both short- and long-sightedness. 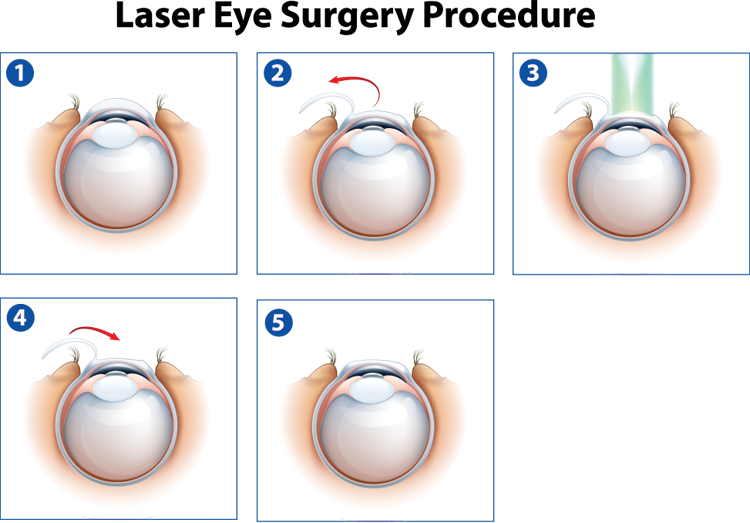 How do LASIK and LASEK work?

Both LASIK and LASEK procedures work their magic by reshaping the cornea so when light rays pass through this surface, they are bent (or refracted) in such a way to focus perfectly on the retina at the back of the eye and form a clear image. In this way, undergoing either LASEK or LASIK can reduce your dependency on glasses and contact lenses. What they will not necessarily help with is the natural aging process of the eye known as presbyopia (Greek for “old eye”), which refers to the need for reading glasses and typically occurs around the mid-40s for most people.

LASIK and LASEK are very similar procedures with one defining difference. In LASIK, either a laser or a sharp bladed instrument is used to slice a hinged flap of tissue from the surface of the cornea (after reading that I bet you’d rather face those zombies with blurry vision), and a laser is used to remove selected sections of the remaining corneal tissue to reshape it. Afterwards, this flap of cornea is repositioned and allowed to heal. With the LASEK technique, only the very top layer of tissue, the epithelium, is lifted and pushed to the side to allow the laser to reshape the underlying cornea. Similar to LASIK, this layer of epithelium afterward is moved back to cover the cornea and the healing process begins.

Which one should I get?

Ultimately, the decision as to which procedure is most suitable for each individual’s eyes lies with the surgeon. One of the guiding factors will be the condition of the cornea. Since LASIK requires creating a flap of cornea tissue 100-180 microns thick, if the cornea is already too thin then there won’t be much remaining cornea left to reshape. In cases like these, LASEK is the way to go as the epithelium layer involved is only 30 to 50 microns. If the cornea is unusually thin, irregular, or has a pre-existing condition, such as a corneal thinning disease known as keratoconus, the patient may not be suitable for refractive surgery at all.

As with any surgical procedure, there are always risks involved. For LASIK, many of these risks are associated with the corneal flap; for example, the flap becoming dislodged, the flap being too thin, or wrinkling occurring within/underneath the flap as it heals against the remaining corneal tissue. As the LASEK procedure involves manipulating only a layer of epithelium, these flap complications are minimized, which is why it tends to be the procedure of choice for those with violent hobbies, such as martial arts or the military (wouldn’t it be awkward if a piece of your cornea fell off while engaged in hand to hand combat?). In both refractive surgical techniques there is also the chance of regression, which involves the original prescription beginning to creep back, i.e. a previously short-sighted eye slowly becoming short-sighted again, and as with any activity that involves exposing the body to the outside environment, there is also always the risk of something getting infected.  The more experienced a refractive surgeon, usually the lower the risk of any complication occurring.

Recovery time and post-operative comfort is reportedly superior with the LASIK procedure compared to LASEK, though functional vision in both cases returns within about a week. Those patients already prone to dry eyes may find the LASEK procedure to be less of an exacerbating factor post-operatively compared to LASIK, as the nerves in the cornea are not severed with the epithelium-only manipulation in LASEK.

It is also important to understand that other ocular conditions, not just refractive error, can affect vision. Neither LASIK nor LASEK will get your vision to 20/20 if there is something else going on, such as significant cataract or macular degeneration.

References
Number of LASIK surgeries in the United States from 1996 to 2020.