What are cataracts?
A cataract is any opacity of the anatomical lens inside the eye. That is, the lens becomes increasingly opaque which causes progressive blurring of your vision. 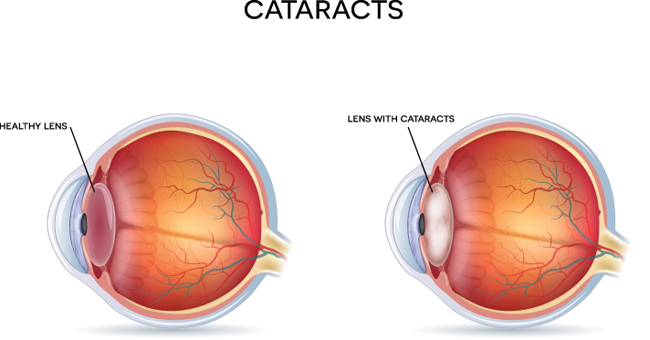 The lens sits behind the colored part of the eye known as the iris, and is directly in the path of all light entering the eye to create the image of what you see on the retina. You can imagine how you would see if there were anything obstructing this pathway, such as a hazy cataract in the lens – the image reaching the retina at the back of the eye would be hazy. The ophthalmological term for cataract originated from the Greek word for waterfall, as the opaque nature of a cataract in the eye was reminiscent of the churning white froth from a waterfall (a very poetic etymological explanation for a rather unromantic vision impairing condition).

A doctor I know likes to tell her patients that cataracts are as common as wrinkles. They also tend to be associated with the onset of wrinkles in the way that the majority of cataracts are age-related, and as many a despairing 40 year old woman knows, wrinkles (and cataracts) often like to rudely announce their arrival around this decade of life. It may help to know that, like wrinkles, cataracts are usually benign and actually an entirely normal part of ageing and being human. By the year 2020, an estimated 30.1 million Americans over the age of 40 will have some degree of cataract in at least one eye.

There are, however, other causes of cataract and associated risk factors.
Other types and causes of cataract
Certain systemic diseases can affect the development of cataract, such as poorly controlled diabetes or other metabolic conditions such as galactosemia, myotonic dystrophy, or Wilson disease. These cataracts often present in a different form from the garden variety age-related cataract and can be identified from their appearance alongside a handy hint from the patient that he or she has a systemic health condition. For example, diabetic cataracts are sometimes called snowflake cataracts as they appear to be like white-grey opacities spread through the front surface of the lens (another example of ophthalmology applying pleasant imagery from nature to ocular diseases); cataracts associated with galactosemia appear as oil droplet cataracts at the nuclear center of the lens (we’ve now moved on to cooking analogies).

Congenital cataracts occur within the first year of life and must be addressed promptly due to the potential for irreversible vision loss in these pediatric patients by inducing a lazy eye. In the US, 2 in 10,000 births are diagnosed with congenital cataract.

Cataracts can also occur from exposure to radiation, trauma to the eye, the use of corticosteroid medications, smoking tobacco, or electrocution. Certain types of eye surgery procedures can also result in a cataract post-operatively – this is known as an iatrogenic cataract.
4 signs that you may have a cataract
The best way to find out if you are developing a cataract is to see your eye care practitioner. A general practitioner typically would not be able to give you a definitive answer as specialized equipment is required to view the eye’s lens clearly.

You may suspect that you have a cataract if you begin to notice any of the following:

When is the right time to have cataract surgery?
There is not typically a hard and fast rule to decide on the moment a cataract needs to come out. This will be determined by many factors, including each individual patient’s lifestyle, hobbies, and visual demands. For example, a visual arts teacher will be much more affected by changes in his color perception from an early cataract than someone who walks dogs for a living. Similarly, the visual demands of an Olympic sharpshooter are significantly higher than a vocalist or recording artist. A discussion between you and your eye care practitioner is the best way to decide on a cataract removal plan.

In some cases, an ophthalmologist may advise that the cataracts should come out sooner rather than later despite a patient feeling they’re satisfied with their vision. This may be because the patient no longer achieves the vision standards for maintaining their driving license as per state or national laws, or if the cataract is deemed to be “hypermature” and at risk of rupturing and causing other ocular issues.
What does cataract surgery involve?
In most cases, cataract extraction is performed under local anesthetic rather than general. The patient will be given a sedative but will usually be required to remain conscious so as to be able to follow instructions, such as keeping their vision fixed on a certain target. Unconscious patients tend to roll their eyeballs back up into the socket, which makes for rather difficult surgery! General anesthetic may be used for uncontrollably anxious patients, those with allergy to the local anesthetics, or for those who have other pre-existing medical conditions.

The pupil will be dilated to expose the cataract behind the iris using eye drops; in some cases a little square ring is temporarily inserted to expand the pupil. One or two incisions are made in the cornea, the clear bubble of tissue over the iris, depending on the surgeon’s preferred technique, to allow the instruments to be inserted into the eye to reach the cataract. The cataract is then broken up into pieces, usually using ultrasound in a technique known as phacoemulsification, and the fragments removed from the eye. A plastic implant called an intraocular lens (IOL) is then inserted in its place. Often this IOL is measured so as to correct the existing prescription of each eye so that the patient is no longer as dependent on spectacles, either for long distance vision, near vision, or both, once they’ve recovered from the surgery. Today, most cataract extraction techniques are suture-less, meaning the corneal incisions self-seal without the need for stitches.

The ophthalmologist will then prescribe certain eye drops to help with the post-operative healing process and will usually recommend the eye be protected with a small plastic shield, especially while sleeping. It will take about four to six weeks for the eye to recover fully and the vision to stabilize; after which time you may be advised to see your optometrist for a spectacle update, if necessary.

The American Society of Cataract and Refractive Surgery reports an average complication rate of less than 2% during cataract surgery. Potential complications include prolonged post-operative inflammation, increased glare sensitivity, dysphotopsias (perceived flashing lights in the vision), a rise in pressure of the eye, dry and gritty eyes, or macular edema (swelling of the macula area in the retina). A complication that could occur further down the road is known as posterior capsular opacification, which is when the IOL becomes cloudy from cells growing over it. All these potential complications are usually easily addressed with time, eye drops, or a short laser procedure.

As you can see, cataracts are really nothing to fear. Similar to the laugh lines on your face, in most cases, cataracts are actually a sign that you’ve lived long enough to get them!