When talking about risk factors for various diseases, gender often comes into play. And we’re not just talking about being more at risk of ovarian cancer if you’re a woman or prostate cancer if you’re a man compared to the opposite gender. Just to name a few – if you’re female, you have a higher risk for autoimmune disease, cataracts, and arthritis, compared to your male counterparts. If you’re a man, you’re more likely to experience cardiovascular disease, type 2 diabetes, and pterygia (surfer’s eye) compared to the fairer sex.

Overall, women are found to have a higher prevalence of many eye conditions, including age-related macular degeneration, dry eye, and thyroid eye disease, compared to men. The reasoning behind this is thought to be due to the longer average lifespan that women enjoy. Naturally because of this, age-related diseases are found more often among women (something that they do not enjoy). However, doctors are becoming increasingly aware of the role that hormones can play when it comes to disease risk, including the eye disease glaucoma.

The Risk of Glaucoma for Women

Glaucoma is part of a group of eye diseases known as optic neuropathies. During glaucoma, the optic nerve, which is crucial for vision, slowly becomes damaged. The result is gradual and permanent loss of your vision, typically starting in the sides (periphery) of your sight. In severe and untreated cases of glaucoma, vision loss can be complete, including your central vision.

Current treatments for glaucoma are aimed at lowering the eye pressure to protect the optic nerve. This can be achieved with eye drop medications, laser treatment, or surgery.

The main risk factors for glaucoma are usually cited as:

However, if you’re female, the risk factors don’t stop there. Research suggests that the female sex hormone, estrogen, may be a contributor to a woman’s likelihood of developing glaucoma. For example, early menopause (before the age of 45), increases the risk of glaucoma by 2.6 times compared to women who enter menopause after age 50. Having surgery to remove both ovaries before the age of 43 significantly increases glaucoma risk, with even hormone replacement therapy unable to reverse those effects. Being late to get your first menstrual period is also associated with a higher risk of glaucoma in women, as is having more children. This list implies that estrogen may actually be protective against glaucoma. A drop in estrogen levels in the body, whether from your body’s natural aging or as a result of medical interventions, may expose your optic nerve to damage.

But if birth control pills contain estrogen and estrogen is meant to protect the optic nerve, what’s with this talk of increased glaucoma risk with the contraceptive pill? Multiple studies over the years have noticed an association between using oral contraceptives for 3 or more years and an increased risk of glaucoma. At the time, the design of these studies didn’t allow the authors to conclude that birth control pills directly caused glaucoma.

The contraceptive pill is hypothesized to contribute to glaucoma risk in the way it alters the body’s estrogen levels. Although some pills do contain estrogen, newer generation formulas now contain lower amounts compared to when the contraceptive pill was first approved 60 years ago. In addition to this, some types of modern birth control pills contain no estrogen but instead have the progestin hormone only, which can suppress the body’s estrogen production.

In a more recent study, researchers found that women who regularly used hormonal contraceptive methods were at about two-fold the risk of developing glaucoma compared to women who did not use hormonal contraceptives. Hormonal contraceptive methods included birth control pills, injections, and intrauterine devices. The authors of the study acknowledged that though their findings demonstrated an increased risk, the overall risk of glaucoma among women using hormonal contraceptives was still low. Other experts commenting on the study advised that the results should not deter women of childbearing age from using appropriate and effective birth control (between a surprise baby and a low chance of getting glaucoma, which would you prefer?). It was also pointed out that the results still do not prove that hormonal birth control methods directly cause glaucoma but further research is needed to really pick out the nitty-gritty details of how and why.

In summary, the use of hormonal contraception is something to take into consideration when assessing your glaucoma risk, but nothing more. Anyone, not just women on birth control pills, should have their vision and eye health assessed regularly, including screening for glaucoma. 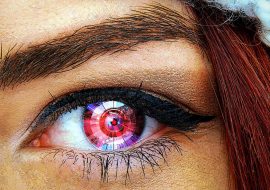