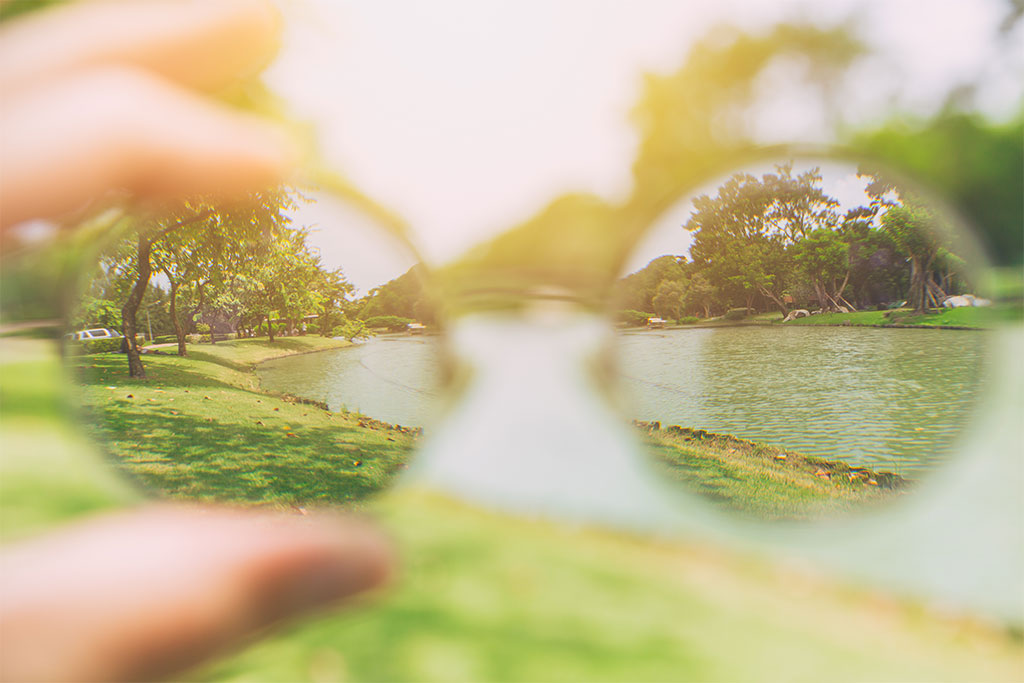 It happens to the best of us, this getting old business. As the internet has succinctly put it, “One minute you’re in your 20s living your best life, the next minute you’re getting excited about an air fryer.” And as the natural order of aging goes, after air fryer excitement comes the inevitable change to your vision known as presbyopia.

Inside the eye, located behind the colored iris, is a transparent anatomical structure known as the crystalline lens. The function of this lens is to adjust the path of incoming light through the eye such that it comes to a sharp focus onto the retina at the back of the eye, a process known as accommodation. The lens does this by changing its curvature with the help of attached fibers and a ring of muscle called the ciliary muscle.

When we’re young and free, this lens is nice and flexible, allowing us to focus on things that are near, such as a book or while threading a needle. As we age, the lens gradually loses its flexibility and accommodative ability. Eventually we begin to realize that to thread that needle or read that fine print on the medicine bottle we need to hold it slightly further away. For most people, this realization hits around the mid-40s.

Enter reading glasses. Or, if you’re still intent on living that best life, perhaps you’re wondering whether laser vision correction might be a solution.

The most accurate answer is one you probably didn’t want to hear – nothing can fix presbyopia. There are currently some pharmaceutical developments underway that may change this answer in the future, but currently there is nothing that can reverse that aging of the crystalline lens and return its accommodative ability.

In the meantime, the best we have are optical and surgical options to provide as much a range of focus as possible but it is important to understand that at the moment all these options are still not as good as the eye’s natural focusing ability.

The optical solutions for presbyopia can get pretty high-tech. Multifocal eye glasses are the most commonly prescribed, while monovision contact lenses and multifocal contact lenses are becoming increasingly widespread.

But you didn’t come to this page to read about multifocal glasses. So, what are your surgical options for this age-old problem of presbyopia?

There are a couple of methods by which LASIK (or another refractive surgery technique, such as PRK) can provide a degree of functional near vision.

Monovision is an arrangement where one eye is surgically corrected for long distance vision while the other eye is corrected for closer vision, typically around arm’s length, or computer distance. The brain then learns to pay attention to the input from one eye over the other, depending on the task at hand – yes, your aging brain still has some adaptability to it!

Monovision is not for everyone. Some people can feel uncomfortable or disoriented by the difference in vision between the two eyes, a situation known as anisometropia. Different people have varying degrees of tolerance to anisometropia though in some cases it may simply be a matter of getting used to it. Your ophthalmologist can simulate monovision in the clinic for you, typically with the use of contact lenses, and may even give you a longer trial period with the contacts to ensure you feel comfortable with monovision during your daily tasks. As monovision causes a slight compromise to depth perception (as there is only one eye working for one distance), this may not be the ideal solution for patients who require very fine depth perception all the time.

There is a variant of the LASIK procedure known as laser blended vision or Presbyond; however, this is not often performed in the US. During laser blended vision, the power correction performed by the laser is not uniform across the entire cornea (the transparent surface at the front of the eye). Instead, certain areas of the cornea are reshaped to provide near vision while other areas are corrected for long distance. Similar to monovision, the brain then adapts around this new experience, paying attention to the clear parts of the visual input depending on the activity.

While LASIK options for presbyopia can greatly reduce your dependency on glasses or contacts, there may be some situations where you still prefer to wear glasses. These occasions can include when reading fine print, in dim lighting or for prolonged periods of time, or driving long distances and in low visibility conditions.

Other Refractive Surgeries for Presbyopia

Before we move past the cornea, a mention should be made of corneal inlays. These are rings of surgical grade material that are surgically inserted into the cornea, causing a pinhole effect. The pinhole effect provides clearer near vision in the treated eye. This option is not offered by all refractive surgeons as the visual outcomes are often not as impressive as with other methods.

Beyond the cornea, lens-based procedures are also available to those with presbyopia. The basis of such procedures is to replace the eye’s natural crystalline lens (which, to be honest, is no longer pulling its weight in a presbyopic eye anyway) with an artificial lens. This lens implant, known as an intraocular lens (IOL), can be multifocal, extended depth of focus, or accommodative.

A multifocal IOL contains varying degrees of power across its surface that correct for both long and near distance vision while an extended depth of focus IOL creates a single elongated focal point to enhance the range of clear vision. Accommodative IOLs appear to be the wave of the future with several such lenses already on the market and more in development. Accommodative IOLs aim to mimic the eye’s natural focusing ability as closely as possible by utilizing methods of adjusting the lens’ curvature, though most people will still find they need glasses for particular activities similar to those described above in regards to laser vision correction.

Ultimately, it’s important to embrace the changes to your vision along with the air fryer and other whizz-bang kitchen appliances. So, if you’re as interested in retrieving some of your near vision ability without glasses or contacts as you are interested in making crispy hot chips with minimal oil, talk to your ophthalmologist or eye specialist.